Almost six years ago, a young woman, Ana Ottoson, working at the Green Cafe in Collegetown in Ithaca, brought to our attention at the that a number of her coworkers from Central America and Mexico were being severely cheated out of their wages. We quickly got in touch with our contacts at the NYS Dept of Labor’s (NYSDOL) Immigrant Policies and Affairs Division about this fact and an investigation commenced immediately of both the Collegetown store as well as the New York City store, uncovering over $1 million in Wage Theft. The NYSDOL was never able to recover these back wages as the owners had gone underground. 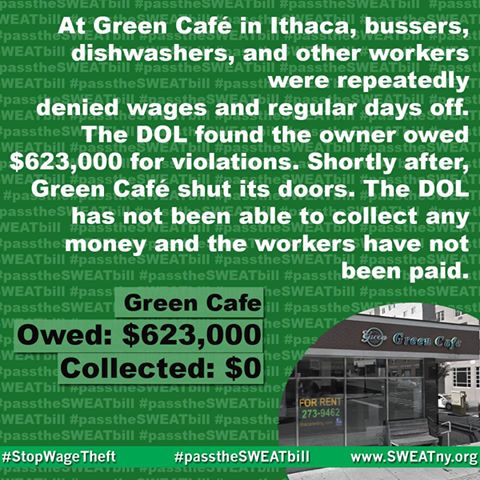 Now a coalition of Workers’ Centers and other like-minded organizations in New York (both downstate and Upstate) are working to get the SWEAT (Securing Wages Against Theft) Bill passed which would make it easier to collect on fly-by-night employers who leave their workers hanging for such large amounts of money.

Two weeks ago, the SWEAT bill passed the Assembly, now we need your help to get it passed in the Senate. Urge Leader Flanagan to put the SWEAT bill, S2232 on the floor for a vote now! (The Legislative Session ends THIS THURSDAY.)

Here’s what you can say:

Share this email with your friends and networks!
What is the SWEAT Bill?
More and more workers are getting cheated of our wages. We’re not getting the minimum wage, or overtime pay, or wages for all the hours that we work. Some estimate that $1 billion a year is stolen from workers in New York City alone. Once workers go to the Department of Labor or file lawsuits, employers are shutting down their businesses (only to reopen under another name), “selling” their homes to family members, filing for bankruptcy and emptying their bank accounts. By the time workers win a settlement agreement or court judgment, employers have hidden all their assets and plead poverty. The SWEAT bill will close loopholes in the laws that allow unscrupulous employers to do this.
« Cornell Graduate Employees, Cornell Administration Ink Election Pact » Creating Our Sustainable Future: Living Wage Visioning Contest