In early 2017 a new bar opened in downtown Ithaca, New York, committed from the outset to ensure all employees a Living Wage. The Watershed (GDAM Industries, Inc.), located on Martin Luther King, Jr. Street a block off The Commons near the State Theater, is a bar and social gathering space specializing in conversational atmosphere until 1 a.m. seven days a week. The business became a Certified Living Wage Employer not long after opening its doors and is the first food service

establishment employing tipped workers to receive certification from the Tompkins County Workers’ Center. The Watershed was also one of the first businesses to increase its guaranteed minimum wage for employees after Alternatives Federal Credit Union released the latest Tompkins County Living Wage Study in August, 2017.

â€œThe Watershed’s commitment to Living Wages, social responsibility, and sustainability is a great example,â€ says Rob Brown, who manages the Certified Living Wage Employer program. â€œAt the Workers’ Center, when we encounter food service businesses it’s usually because of gross labor violations. The Watershed’s responsible business practices stand out and are a model that should define the industry.â€

Ashley Cake, co-owner and president, has emphasized the importance of a Living Wage in her various roles in the community. Of The Watershed ownership’s philosophy, she says â€œWe believe that a living wage is a moral value, and that everyone should be meaningfully compensated for their labor. Particularly insofar as bartenders rely heavily on gratuities for compensation, guaranteeing that our employees never fall below $16 per hour even in the slowest times helps to provide them with a bedrock of surety guaranteeing their livelihood.â€

The Tompkins County Workers’ Center first met Ashley and co-owner Dave Thomas well before the bar opened, when they rented the Workers’ Center space to hold a â€œBarstander Interventionâ€ training developed and taught by Naomi Barry of The Advocacy Center also a Certified Living Wage Employer) for their employees.

The training is designed to teach bartending staff how to identify and de-escalate potentially harmful interactions between people, including the outsized role that alcohol plays in incidents of sexual harassment and assault. â€œAs a career bartender and as a woman, I have observed many of the pitfalls of alcohol service in a social environment and wanted to structure our business around an awareness that responsible service entails more than adhering to the liquor laws,â€ says Cake. â€œUltimately we would like to see this training mirrored in all Ithaca’s bars and restaurants. It is everyone’s responsibility to reduce the rate of sexual assaults and rapes in our society, and we believe programs like The Advocacy Center training can have an exemplary impact.â€

The Watershed is one of the businesses that have endorsed the TC Workers’ Center’s campaign to establish a Living Wage Minimum Wage in Tompkins County. Like most owners and managers of Living Wage employers in competitive industries, Cake doesn’t sugar coat the realities of a commitment to paying workers what they deserve ahead of competitors. â€œThe costs of running a restaurant are very high. The general public doesn’t always understand the true cost of their food, so the market rate is lowered by the cost cutting of most bars and restaurants. The most common business models incentivize paying as low a wage as possible but a new business model is needed such that bars and restaurants can cover their labor costs. It is and will be harder for other food service establishments to certify as Living Wage, and we are in solidarity with the many establishments who confront this difficulty in their good faith pursuit of solutions,â€ she says.

Customers who show appreciation to their bartenders and servers matter a lot to the industry’s workers. â€œWhile we hope to someday operate without gratuities, it would not have been possible for us to be a Certified Living Wage Employer at the outset of our business without certification taking gratuities into account”, says Cake.

When patrons are thoughtful about supporting local and Living Wage businesses, and use their dollars to show that they value these businesses’ workers as neighbors and friends it matters, she emphasizes. â€œConsumers can educate themselves about the true costs of labor as well as food and beverage service, support businesses that pay a Living Wage, and support legislation at the local and national level that codifies a Living Wage across all industries.â€ 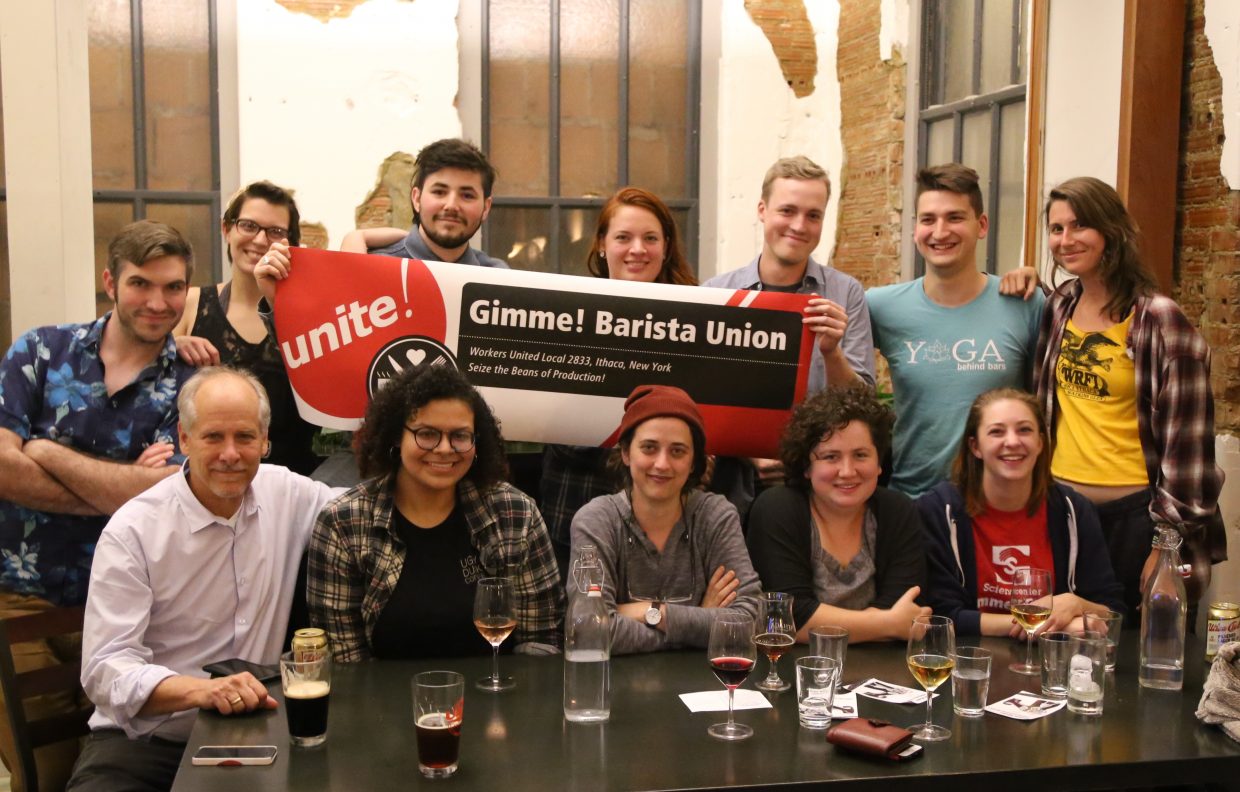 Champions of the work for more dignified labor in the hospitality industry on another front, the union baristas from Gimme! Coffee gather at The Watershed both to spend time together and to discuss their work to build a Hospitality Union in the county, choosing it for the quality service and out of respect for The Watershed as a labor-positive establishment. According to Sam Mason, an organizer for Workers United local 2833, â€œFor me, The Watershed has been such a supportive and safe space for us baristas to come together, relax, and talk labor. They even have extra long tables that accommodate and are essential for group meetings.â€