A bit about the book, and about Rick Winston: What happened in Vermont when the anti-Communist fear known as the “Red Scare” swept the country? Quite a bit, as it turns out. Rick Winston explores some forgotten history as we see how a small, rural “rock-ribbed 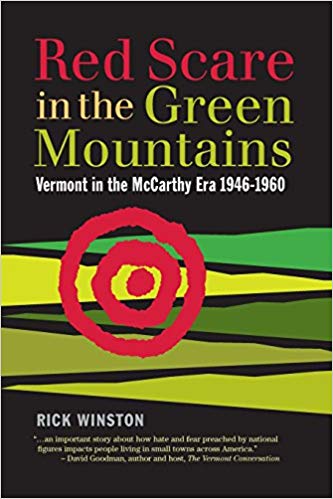 Republican” state with a historically libertarian streak handled the hysteria of the time. Far from the klieg lights of Washington D.C., Hollywood, and New York City, the Green Mountain state challenged the national narrative with its own fascinating stories. Here are nine of the most gripping dramas played out in Vermont during “scoundrel time,” including a high-profile academic firing, controversies involving left-leaning summer residents, courageous newspaper editors who spoke out against McCarthy’s tactics, and a conservative senator who helped take down Joseph McCarthy. Now, as our country again experiences a political atmosphere charged with intolerance, condemnation, and widespread falsehoods, this book could not be more timely.

This event is co-sponsored by the Tompkins County Workers’ Center and Ithaca Democratic Socialists of America.

« Brotherton Construction Becomes a Certified Living Wage Employer » Gig Economy: Who? What? Why?