MILKED: A Report About Immigrant Dairy Workers in New York

Our allies at the Worker Justice Center of New York, Workers’ Center of CNY, and their partners just published Milked: Immigrant Dairy Farmworkers in New York State, a study that finds that a race to the bottom is occurring in the treatment and working conditions of 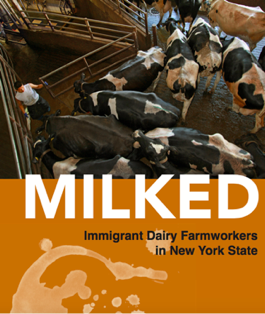 the immigrant laborers who toil in milking parlors and barns. We invite you to read the full report at www.milkedny.org.

The â€œMilkedâ€ report is based on 88 face-to-face surveys with immigrant dairy farmworkers on 53 different dairy farms across the Central, Western, and Northern regions of New York State. It was co-authored by Carly Fox of the Worker Justice Center of New York, Rebecca Fuentes of the Workers’ Center of Central New York, Fabiola Ortiz Valdez and Gretchen Purser, both of Syracuse University, and Kathleen Sexsmith of Cornell University.

The Tompkins County Workers’ Center is a resource hub for immigrant workers, whom we support regularly to see to it that farms uphold labor standards and get relief when they have problems with their employers. We help and provide referrals for farmworkers with everything from unpaid wages to responding to accidents and getting workers compensation benefits, housing, and immigration issues. We also help organize and support a summer Mexican consulate service for farmworkers in Sodus, NY.

Since 2010, the Tompkins County Workers’ Center has done farmworker outreach and occupational safety and health training to guard against preventable accidents like the 2013 death of dairy farmworker Francisco Ortiz Garcia at a farm on Bostwick Road in the Town of Ithaca. (Now that the Trump administration has proposed eliminating OSHA training grants that power this work, your support keeps it going.

Some of the report’s findings report that:

Â· Â  Â  Â  Â  On average, immigrant farmworkers Â work 12 hours per day. Like all agricultural workers in New York, they are excluded from the right to a day of rest and the right to overtime pay.

Â· Â  Â  Â  Â  Two-thirds of workers surveyed have experienced one or more injuries while on the job. Sixty-eight percent of those injured said the damage was serious enough to require medical attention.

Â· Â  Â  Â  Â  Dairy farmworkers live in farmer-provided housing almost without exception. Their housing conditions are often substandard: 58% report bug or insect infestations in their homes, 48% have no locks on their doors, 32% have holes in their walls or floors, and 32% have insufficient ventilation.

Â· Â  Â  Â  Â  Due to their fear of immigration enforcement, the inability to obtain a NY driver’s license, and/or their long working hours, immigrant dairy farmworkers leave the farm premises, on average, as infrequently as once every eleven days. Some leave only for medical emergencies, resulting in almost total immobility and the widespread feeling of being “locked up” [encerrado].

« Gimme! Coffee Baristas Vote (94 to 6%) to Organize Union in Workplace » Town of Enfield Endorses Push for a Countywide Living Wage