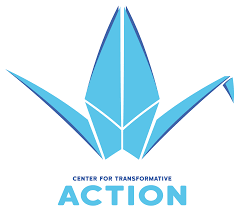 CTA is an educational non-profit organization affiliated with Cornell University since 1971. It originally opened as the Center for Religion, Ethics and Social Policy. CTA’s leaders re-focused the organization’s vision and changed its name in 2006 to address the debilitating animosity and complaint in our increasingly polarized society. Their alternative paradigm to social change brings together principles of nonviolence and solutions-focused systemic change through transformative action and social entrepreneurship. CTA helps to create communities that are socially just, ecologically sound and work for everyone. This is accomplished through their educational programs, as well as supporting system-changing projects with incubator and fiscal sponsorship services. CTA is committed to providing a living wage to all its staff, which includes those of its 25 fiscally-sponsored projects.

CTAâ€™s projects work to transform structures, as well as the habits of mind, that produce inequities in our communities, country and the world. Through their innovative methods, as well as their successes and challenges, they show us what is possible. CTA envisions having change makers everywhere engage and strengthen the power of the heart to remake the world.

When asked what made them interested in becoming a Living Wage Employer, Anke Wessels, Executive Director stated:

â€œCTAâ€™s purpose is to help create communities that are ecologically sound and socially just. This includes creating economies that work for everyone. In order to uphold this commitment with integrity, we must practice it internally. It would be an untenable contradiction for us to advocate for something out in the world without practicing it within our organization. Our values and principles infuse and inform our management philosophy and our work culture.â€

It may be useful for some readers to understand more about â€œfiscal sponsorship,â€ part of the model that empowers CTA projects’ activities. Fiscal sponsorship is a common means by which individuals and organizations can start new, nonprofit programs without establishing a separate 501(c)3 organization. This alternative gives them a safe space in which to test their model, allows them to seek grants and solicit tax-deductible donations under the sponsorâ€™s tax-exempt status. For example, the Tompkins County Workers’ Center operated as a Center for Transformative Action project organization from 2003 until 2011 when TCWC incorporated independently and received recognition from the Internal Revenue Service as a public charity. CTA has housed numerous social justice groups in its 46 years, encouraging their leaders to promote living wages and other socially responsible practices.